Showing posts from September, 2012
Show all

Soup, Salad, and a Lesson in Life. 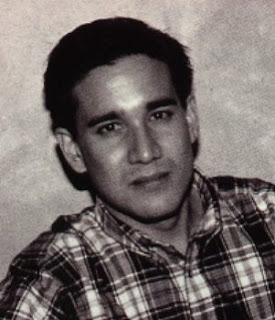 I was enjoying a few drinks with friends at this great little watering hole in Fort Lauderdale called Cathode Ray. I had no way of knowing that the cute guy I was looking at across the bar would very soon take his own life. But not until he had taken the lives of four other people, including fashion designer Gianni Versace.
You may remember Andrew Cunanin?

I have to say, he appeared very normal, sweet, attractive. You never would have been able to guess what he was capable of. Nor of the lives that would be lost at his hands.
I have often played that evening out in my mind.
I'm very big on eye contact, what happens the moment glances are exchanged. The knolwledge that is passed,  that tiny peek at the soul that it gives you.
Oddly, looking over at Andrew and he looking back at me was rather benign, uneventful and disappointing.
Rather like the look I got today, 15 years later, when I glanced into the eyes of a different time of monster, albeit …
Post a Comment
Read more 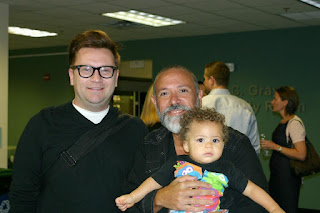 My Husband and I were recently asked to speak at our Pride Center.
We were part of a series called Face 2 Face, Making our Families.
We shared during an evening dedicated to domestic and international adoptions for our LGBT community.

It was indeed amazing to see a room full of Gay and Lesbian couples and individuals seeking information on how to grow their families.

There were also a good amount of State and County workers there to get a sense of what our little community was up to.

I even recognized one of the adoption specialist from Childnet, our version of DCF sitting in the back row.

The following post was written for Ergobaby, not to be used or duplicated without the authors consent.


Our Son Benjamin was born nearly 10 months ago.

Of all the things people told us,
the one thing that shook my existence was when we heard the following,
"Well I guess your traveling days are over for a while!"

Shook my existence I tell ya!
You see, my Husband and I are adventurers, we climb pyramids, we explore distant worlds, we ride camels and we live for our next trip.

Pillow talk in our home revolves around things like the Taj Mahal or Machu Picchu or where we want to live next.

And that is why those words sat so heavily on us.

Because we were Dads now would that mean that the magic of Morocco or the secrets of the Incas could only be ours by going to Epcot Center when our boy was two or three years of age?

Well no, not us I say, and thanks to our Ergobaby Carrier we proved all the naysayers wrong.

We just returned from our first great adventure to Puerto Rico with Ben.
Wi…
Post a Comment
Read more

The following was written for It's Conceivable, and can not be used or duplicated without the authors consent.


My Family and I just returned from a great adventure.
Were infamous for our travels you know.

We climb pyramids, ride a camel every so often, drink the water, and follow the locals.
We are far from wealthy, but believe travel to be meaningful to our souls.
We'll pinch a penny and brown bag it now and then in order to hit the skies.

Pillow talk in our home has always been about places and cultures.
Right now we are in the midst of planning where we will be as the Sun rises on my Fiftieth birth year.
I'm torn between the Taj Mahal or Machu Picchu, my Husband has an Indonesian temple in mind but hey, Its my birthday right?

I tell you all this so you can appreciate how we felt after our Son was born and people started saying horrible things like "Well I guess your traveling days are over for a while!" or "Disney World here you come!"

Henry Amador-Batten
henry amador-batten is a leader, an artist, a traveller, a husband, a father, a healer, a life coach, a thinker, a gypsy, a pacifist, a lover, a yogi, a "buddha", a listener, a spaniard, a wedding officiant, a philosopher, a nudge, a writer, a fly-on-the-wall, a son, a dreamer, a shoe fanatic, a sage, a fashionable man-about-town, a storyteller, a man-of-action, an ego-maniac, a human, a nurturer, a beach bum, a worrier, a gardener, a mystic, a believer...and so much more.